This is a blog that features the movements of eagles reared in Scotland and fitted with satellite-received transmitters. This effort to better understand eagle dispersal is being undertaken by Natural Research and its partners: the Highland Foundation for Wildlife, the RSPB, SNH and the Scottish Raptor Study Groups. Eagles have been tracked since fledging and data from them will form part of a Natural Research funded PhD by Ewan Weston at Aberdeen University.

IF YOU CLICK ON THE MAPS THEY WILL OPEN IN ANOTHER WINDOW AND WILL BE MUCH CLEARER.

On 25 and 26 November a camera set up by David Anderson of the Forestry Commission on a carcass on the Cowal Peninsula photographed a golden eagle fitted with a satellite transmitter.  See the antenna?  Almost certainly this is 119987.  See the pictures below.

On 4 November 119986 was located near Tomintoul, on the 19th it made a move toward the SW and by 21 November it had moved to near Crainlarach.

On 7 November 119987 was located near Ford at the south end of Loch Awe.  On the 14th it had moved to the Cowal Peninsula, west of Dunoon, where it remained until the end of the transmission period on 21 November.

During the whole transmission period, 13-22 November, 119988 was located west of Brora and Helmsdale.

During the whole period (8-25 November), 57109 was located in the upland SE of Newtonmore and W of Braemar. This is an area frequented by a number of the eagles reported on in this blog. See earlier posts.

On 23 August 119986 was located about 2 km NNE of Inchgrundle, and moved in the uplands north of Auchronie until 29 August.  It then moved north to areas with a lot of muirburn about 2 km N of Gairnshiel Lodge, where it was located on 1 September..

On 23 August 119987 was located south of Largiebaan on the Mull of Kintyre.  Early on 28 August it moved north, and by 1 September it was located about 2 km WNW of Lochgilphead.

119988 was located on 23 August between Lairg and Clashban. On 25 August it moved north across the A839 into and area about 2.5 km north of Rhaoine.  On 26 August it moved South to an area about 4-6 km east of Bonar Bridge, where it has stayed until early September.

57109 moved in a very limited area of < 50 sq km, concentrating most of its time in one glen north of Calvine.  If you look back at earlier postings you will see that this is familiar ground to 57109.

On 2 July 119986 was located about 4 km E of Fernybank.  By the 3rd it was located north of Fernybank where it lingered until the 7th, after which it moved a bit farther west (~5 km) and has been settled in upland areas NW of Tarfside.

During early July 2013, 119987 was located mostly in northern Kintyre.  At the beginning of that period 118897 was located NW of Ellary.  On 5 Jly it moved ~7 km to the NE where it lingered until the 7th.  On that date it made a brief foray south then returned and headed north on the 8th.  By the 9th it was located south of Eredine in land between Loch Awe and Loch Aray.  By 11 July it had moved to a location SE of Kilmelford.

Between 1 and 11 July, 119988 moved mostly within a relatively restricted area north and east of Bonar Bridge.  On 5 July it did make a circuit to the south and west covering about 60 km in 6 hrs.

120196's movements during early July were not very different from those of 57109 (below).  120196 started out in early July southeast of Loch Ericht.  By 5 July it was moving east across the southern Cairngorms.  On the 9thti was located north of Enochdhu from whence it moved farther east to the uplands west of Clova on the 11th.

The ranging behaviour of the eagles was a bit mixed during early June.  Some moved within relatively restricted areas, while others traveled from central Scotland right up to the north coast.

11987 spent the whole period in north Kintyre.  On 4 June it was located NE of Ormsary and on 6 June it moved a short distance (about 3 km) to open ground W of Ellary. On 17 June in moved NE about 7 km toward Lochgilphead.

11988 was very mobile during the first half of June.  On 4 June it was located east of Kinlochleven near the Blackwater Reservoir, but later in that day it moved north to a location just west of Invergarry.  On 6 June it moved farther north to within about 3 km of Struy, but kept going to upland area east of Loch Broom.  On 7 June it was located west of Altnaharra, and by 9 June it was near the north coast of Scotland near Tongue.  From there it wandered east a bit until the 14th, then moved SE.  By the 17th it was in upland west of Kildonan Lodge.
120196

120196 moved within a fairly restricted area north of Blair Atholl.  Locations at the beginning and end of the period were only about 2 km apart.  During 5-8 June it did make a quick jaunt around the Cairngorms.
57109

Last summer we fitted 5 golden eagle chicks with satellite transmitters, one which unfortunately did not survive to fledging. We'll try to post maps of the movements of all these birds. 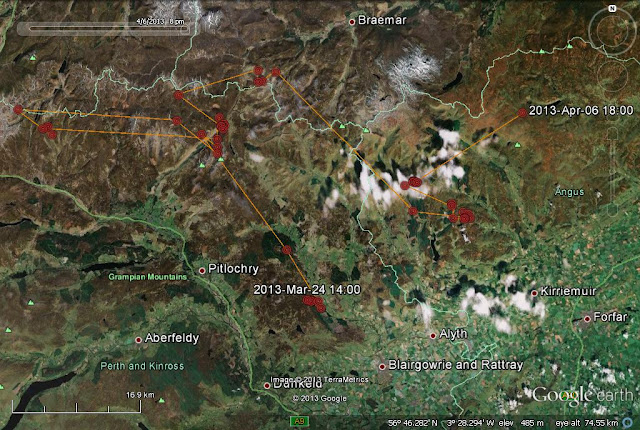 We have been following this bird in the blog for a few months now. You can look at the archived posts to view its history. The movements shown in the map above are similar to those made before. 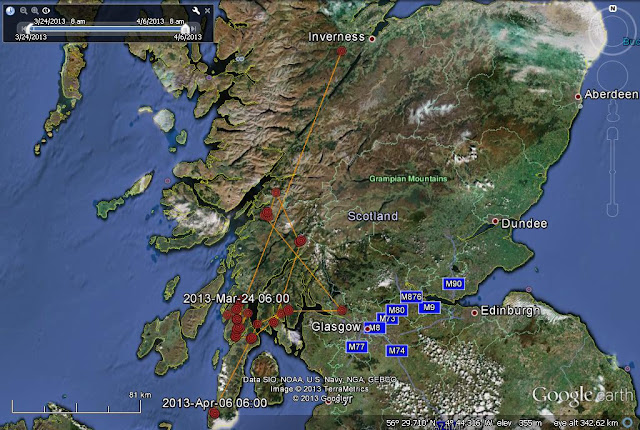 Was a single chick fitted with a satellite transmitter at a site on Kintyre in June. The weather was awful with extreme humidity and clouds of midges, but a break in the rain gave us an opportunity to climb into the nest and fit the transmitter to the chick. We suspect that the chick is a male; it was in good condition. This bird made two exploratory trips prior to dispersing; since dispersing on the 1 March it has moved off into North Argyll. Much of the time period shown on the above map was spent by this bird in North Argyll with the location near Inverness being a likely transmitter error. For much of the period 1 - 3 April it was on the Cowal Peninsula, and ranged as far east as a location just northeast of Dumbarton. 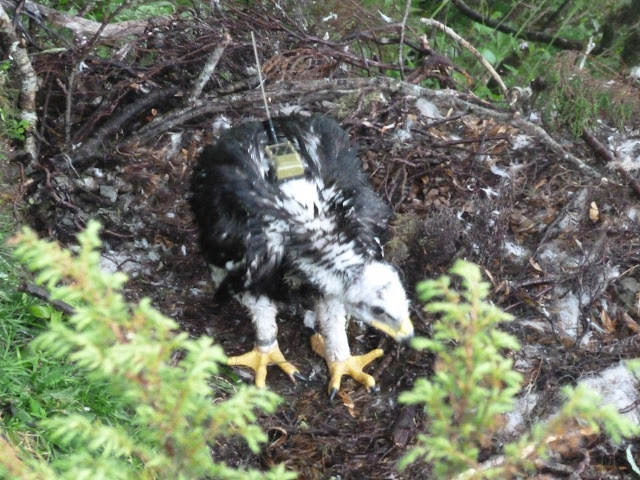 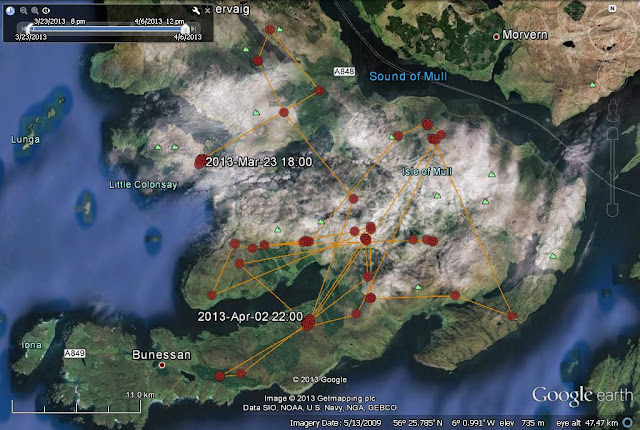 119988: 23 March - 2 April 2013
﻿
119988 was a single chick fitted with a satellite transmitter on the Island on Mull. This is the first golden eagle to be fitted with a transmitter on Mull. As the island is famed for its populations of raptors (especially golden and white-tailed eagles) it will be very interesting to follow its progress. This was another male bird and the nest contained had prey items including deer calves and both long and short-eared owls. This bird was the first of the tagged birds to fledge and was the most adventurous prior to deciding to permanently leave the natal site. After dispersing on the 15 Feb this bird has left Mull very briefly, moving as far as Fort William before returning to Mull where it has been exploring the island. Paul, keep your eyes peeled. 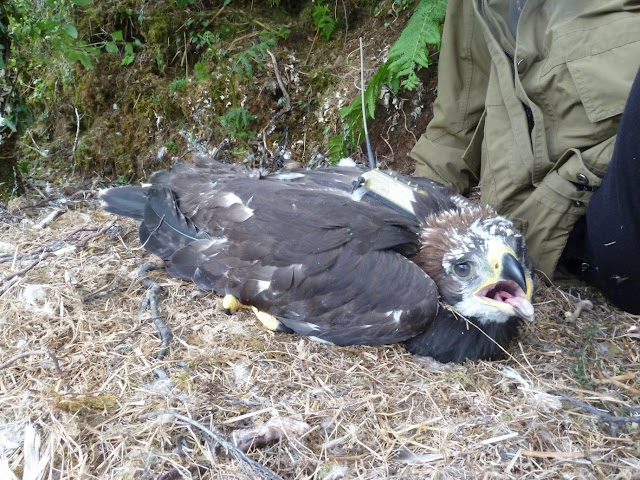 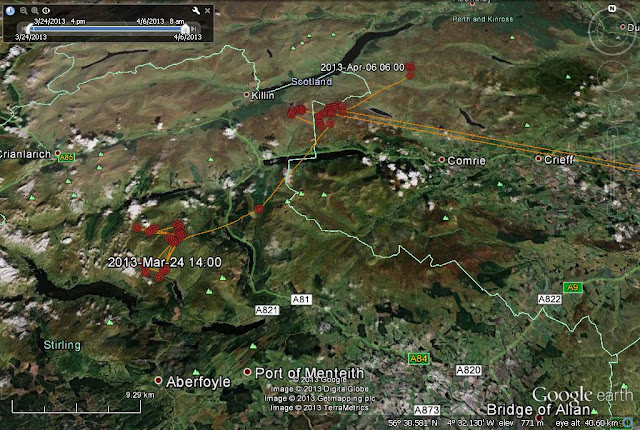 120196 was a single chick fitted with a satellite transmitter near Loch Lomond. He was thinner and lighter than any of the other birds to which we fitted transmitters, but was in good fighting spirit. Signs of recent hard times (but previous good conditions) were that he had recently eaten his twin, which was presumably also experiencing hardship late on in the nestling period! Despite this poor start to life this male chick has managed to overcome this and ranged widely in the natal area prior to dispersal. After dispersing on the 9 March this bird has moved between Loch Fyne and Loch Katrine. The period covered by the map above has this bird moving between areas east of Loch Katrine and south of Loch Tay. There was a location at 10:00 on 3 April about 150 km east of Newcastle, but I guess that was an error. 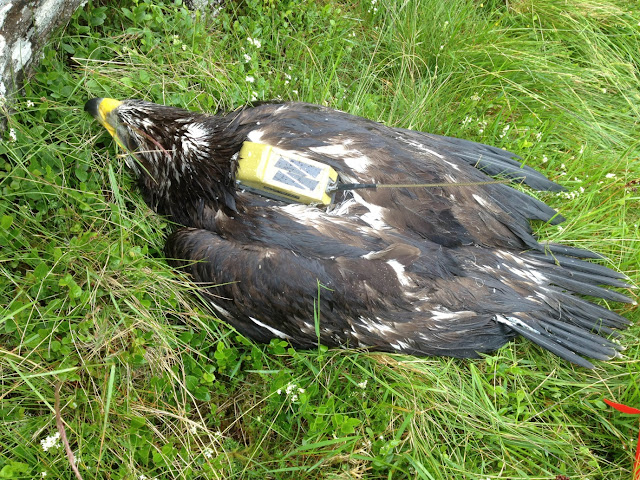 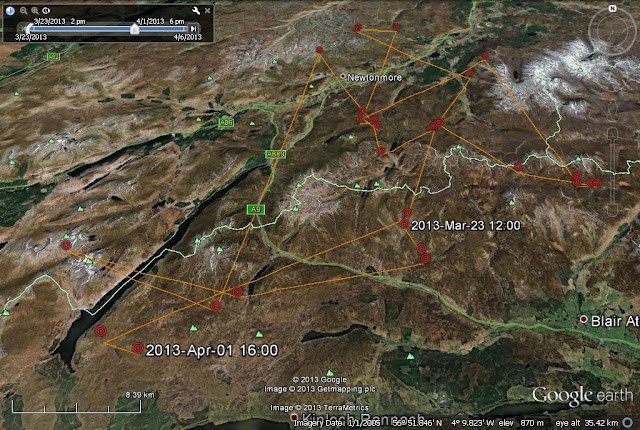 We have been making blog posts for this bird for some time now. Look at the archived blog posts to see its history. These areas visited in the map above have all been visited by this bird before... more or less.

Posted by EwanWeston at 17:06 No comments:

At the beginning of this time period 57109 wandered for 1-2 days around the south side of Loch Tay,  It then returned to concentrate its movement in the area it has spent most of the winter, making some forays to the north and southeast.
Posted by Mike at 11:09 1 comment: